Is Bitcoin a Bubble or the Future? 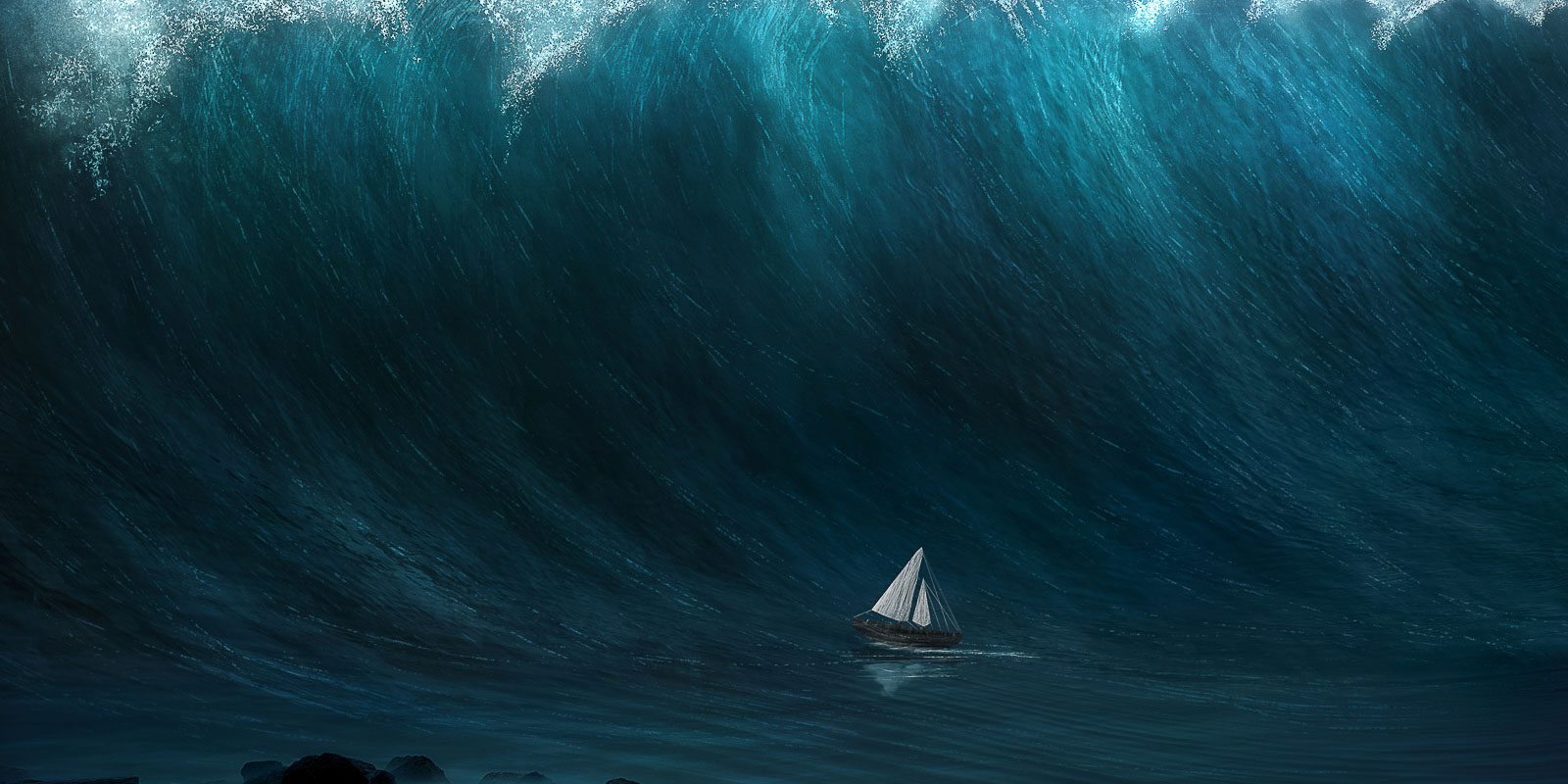 ‘The chance of gain is by every man more or less overvalued, and the chance of loss is by most men undervalued.’

2017 marked the year that Bitcoin, a virtual “cryptocurrency”, exploded in value with recent prices as high as $18,000 AUD creating a whole new generation of millionaire and billionaire nerds with the rest of the population scrambling to figure out how they too can get on the bitcoin bandwagon resulting in “How to buy bitcoin” the third most searched for “how to…” phrase on google.

We now have futures trading for bitcoin, an exponentially growing transaction market, and in the meantime, many analysts wondering if bitcoin is just beginning its path towards world dominance, or is it possibly one of the biggest speculative bubbles around a single technology to date?

To understand, or rather attempt to understand the future of these cryptocurrencies, we first need to understand what they are and especially why they’re now getting so much traction.

Crypto Currencies are essentially digital assets, or to put it simply, virtual lumps of gold, that are designed to work as a medium of exchange much in the same way that gold or a conventional currency works. However, unlike conventional central bank controlled currencies,  cryptocurrencies typically have mathematical limits to their inflation rates (the rate in which they can be ‘produced’), along with limits to the number that can ever be found/produced. Instead of relying on complex production methods to limit who can produce the currency, which the integrity of our own currency (the AUD) relies on or physical limitations of how much actually exists (in terms of precious metals), cryptocurrencies rely on mathematics, and in particular, a branch of mathematics called ‘cryptography’.

Without going into too much detail, cryptography is the method through which the units of virtual currency are created, secured, and transacted. Each time you buy, sell, or “discover” a bitcoin, that bitcoin gets tied to your virtual wallet.

The integrity of the Cryptocurrency system is ultimately tied to the integrity of the mathematics underlying the technology, the assumption is that the mathematics won’t be “cracked” by new technologies while the value of the Cryptocurrency is ultimately backed by nothing more than demand, bitcoin is a fiat currency like conventional currencies, it is only worth something if someone else decides they want it.

1. Cryptocurrencies are decentralised. The power to control the monetary production within a country is one of great responsibility and potentially perilous repercussions if mismanaged. This has been evident in such counties as post-WW1 Germany and more recently Zimbabwe, who both inflated their currencies until they literally weren’t worth the paper they were printed on. But, the power over the currency can, not only result in the destruction of currencies and countries but also more subtly the control of the business cycle with immediate effects on the bond and ultimately the stock market. Cryptocurrencies remove this power from the people, for better and worse.

2. Set inflation rate. Adaptive Scaling is a technology that limits the rate at which cryptocurrencies are produced. Cryptocurrencies are created through a computer solving a puzzle/complex mathematical problem. The rate at which these cryptocurrencies are discovered is tied to the number of computers currently working to discover them. That is, the more computers/people who are trying to find bitcoin, the more complex the process becomes to find one, the fewer computers crunching the maths to ‘find’ bitcoin the easier it is to ‘find one’. The result of this is that bitcoin has a set inflation rate.

3. All transactions are pseudonymous. That’s to say, that while all transactions are publicly listed on a ledger, the funds are not tied to real-world entities. Depending on the exchange, bitcoin can be exchanged completely anonymously resulting in a large uptake in the black market.

4. Currently, the technology is largely unregulated across most of the world and even in counties that have tried to regulate the technology, the way bitcoin and other cryptocurrencies work, it is really quite difficult to control its usage.

The question becomes, will the sheer number of alternative cryptocurrencies that are coming into existence result in the destruction of the Cryptocurrency market, or will a few currencies last while the majority of them die?

2. Arbitrage. Already the price of bitcoin can vary across multiple exchanges.

3. Volatility. This year alone the price of bitcoin has crashed multiple times while at the same time as reaching historically record levels with unsustainable levels of growth. While a currency is this volatile, it makes it hard to be used as a meaningful exchange of value. For example, people will be less likely to use bitcoin to buy a pizza or a car if they believe the value of bitcoin might double within a week or even a month while at the same time sellers will be less likely to accept bitcoin if they believe the value could plummet.

4. Energy consumption. If governments were serious about the dangers of global warming (let’s be honest, they aren’t and they most likely never will be), they would probably ban the process of Cryptocurrency mining, which was estimated by the Guardian to consume 3.4 gigawatts of electricity in 2017 alone, which is a greater consumption p.a. then some 159 counties. That’s an enormous amount of energy being spent on solving problems for the sake of solving problems that ultimately have no real world benefit. Not to mention that the majority of this electricity is powered by coal in third world countries. Discovering cryptocurrency units, a process called mining amounts to nothing more than computational masturbation, which is part of the reason why it appeals so much to computer nerds and hardware junkies. Cryptocurrency mining has given value to computers crunching numbers for the sake of crunching numbers with no real world value or purpose. While at the same time there is a real world demand for enormous parallel computational power, maybe the cryptocurrency of the future could be one which requires useful calculations through a distributed computational model tacking real world issues (please someone take that idea and run with it).

5. Transactions are usually irreversible. Once a transaction is made, that’s it. Meaning that consumers won’t have the same protection against fraud as what they do with conventional currencies.

7. The value can be distorted and artificially inflated. The pseudonymous characteristics of these currencies can result in traders artificially inflating and then deflating the price which may well account for the reason why it has soared to new highs in 2017. To put this simply, traders can buy and sell between each other, each time inflating the price, before offloading the inflated currency causing a significant market sell off followed by repurchasing their bitcoin at the deflated price. Post the initial writing of this article, Credit Suisse reported that 97% of bitcoin is owned by 4% of addresses. This centralised distribution of Bitcoin means that those few addresses that control the vast amount of bitcoin, can artificially control the price, utilising their control as a method for taking money from smaller investors. 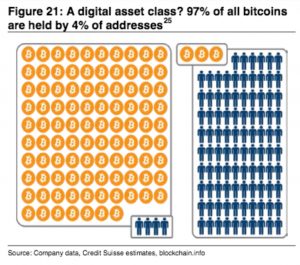 and last but in every way not least,

8. Governments won’t let go of control of their monetary power. For cryptocurrencies to rise in dominance, they will have to displace conventional currencies ultimately robbing governments around the world of monetary control. Control, that governments value highly or at least should value highly. The reason why the Eurozone is failing (I honestly think it is), isn’t largely because of immigration issues but rather because smaller countries have forfeited their own monetary control and have suffered greatly because of it.
When bitcoin reaches supremacy and is at the pinnacle of its dominance. It will also be at its most vulnerable point to regulation and government crackdown. This one issue alone is enough to convince me that the bitcoin mania is ultimately a bubble and not the start of the next world currency.

It is because of a growing lack of trust in conventional currencies combined with a current lack of high yield investments that have caused these cryptocurrencies to rise in dominance to the point that they have. Cryptocurrencies are seen as a speculative hedge against other investments or even a hedge against conventional currencies. They offer no dividends, no real returns for their investment, their formation is arbitrary, their value is arbitrary, their rules are arbitrary, and their potential rise to power can’t move ahead without shifting that power from other sources.

The main benefit of cryptocurrencies, decentralised control, and fixed inflation rates, is also simultaneously their greatest weakness. It is the very reason why governments won’t allow this new flashy technology to reign supreme. However, if only a few cryptocurrencies survive, if prices stabilise, maybe just maybe, they could become another alternative currecy that consumers could use, however the rapid rise in value also idicates that they are used for speculative investments tied to debt that in order for it not to correct or even collapse, requires the perpetual unsustainable rise in value. If these cryptocurrencies slowly, gained value, slowly gained traction, then they might have had better chances of surviving and becoming mainstream currency alternatives, but the current trajectory indicates that what goes up will come down.

Despite these major drawbacks, I would still trade cryptocurrencies. The first reason is because my beliefs about their rise to supremacy could be wrong, the second reason is that while I’m certain that cryptocurrencies won’t be an ocean of economic change replacing our current monetary systems, they are undoubtedly a wave, and hence while the surf is strong, the waves can be ridden and a lot of money made.