The Next Financial Crisis Will Be Worse Than the Last One 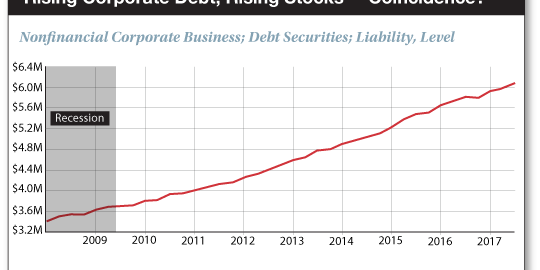 And if you look at the stock and asset markets, as Donald Trump tends to do (and as Barack Obama did, too), you’d think all is fine with the world.

On the flip side of that euphoria however, is the fact that the median wage rose just 2.4% last year and has remained effectively stagnant relative to inflation. And although the unemployment rate fell to a 17-year low of 4.1%, the labor force participation rate dropped to 62.7%, its lowest level in nearly four decades.

That’s particularly difficult for new entrants to the workforce, such as students graduating under a $1.3 trillion pile of student loan debt. (Not to worry though: Goldman Sachs is promoting a way to profit from this debt by stuffing it into other assets and selling those off to investors, a la shades of the subprime mortgage crisis.)

Those of us living in the actual world aren’t quite as confident as the Wall Street amen chorus. Record-setting markets don’t imply economic stability, nor do 40% corporate tax cuts translate into 40% wage growth.

The Federal Reserve raised rates three times last year. But because it fears additional hikes or larger hikes would cause a market meltdown, each time the Fed acted, it did so by the smallest sliver it could —25 basis points.

As part of its rate-hike-into-strength message, the Fed forecast that the job market and economy will further improve in 2018