Tear the Bastards to Pieces! 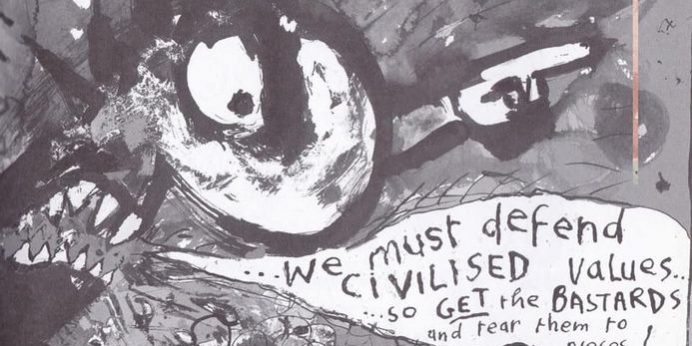 When I first saw this cartoon, my mind raced with examples of intolerance demonstrated by political groups and politically minded people who share differing positions and world views to what I do. And the more I contemplated the image, the more I started to contemplate that reaction.

I think that it can be fairly well assumed that the vast majority of people who live in our pocket of western civilisation would agree with the statement that their primary political concern is in ‘maintaining civilisation’. Whether it’s a conservative preoccupied with society’s untethering from traditional values through to a greenie imagining our world descending into a dystopian wasteland, all political perspectives and ‘sides’ have an image for what ‘hell’ our society can become. Thus, due to this hell, there must also be villains, namely those who steer society towards this ‘hell,’ and also possibly, to save us from complete despair, the potential for a savior, usually in the form of our infallible prescriptions of how avert complete disaster.

I don’t think anyone would argue that the problem with this apparent reality is necessarily the underlying goal which is to stop society from drifting towards a ‘hell’; rather it’s more likely that the pathway to hell will and never will be agreed on, and thus the pathway to a less hellish version of reality, or even to heaven in the case of the utopists, will never be agreed upon. However, this impending hell remains, and thus the villains remain, and the savior needs to be chosen.

If my observation to the nature of political discourse is at least in part accurate as to how society works, then I don’t think it’s possible for people to ‘love’ democracy. That is to say, the losing side in any political movement will often think and feel as if the villains are in control. Trump’s 2016 win and Biden’s 2020 win were (most likely) products, to some degree, of democracy. But it seems as if many of us act, regardless of whether or not we believe the results of an election to be fraudlent as if democracy is failing when our side fails to win. What this demonstrates, or at least hints towards, is that the majority of us don’t really want democracy, or should I say, we don’t want democracy when our side is losing; they want, we want, dictatorship. Not usually out of a sense of evil and destruction, but out of a desire to impose the remedy, to elevate the savior and save our society from hell.

If the perceived ‘hell’ was less hellish, then maybe we could ignore the villains. If politics was less important, and the differences in the political discussion were perceived to be more trivial, then the villain would appear less evil. But the polarisation that appears to have arguably heightened in recent years has correlated with this elevation of the impending doom from actions perpetrated by our political rivals.

I don’t know if anthropic climate change will destroy our civilisation in the near future, or if neo-liberalism, or socialism, or whateverism will lead to our imminent and irreversible destruction… in truth, I don’t know a lot of things. But I suspect the proliferation of moral and political certainty, the certainty to which we hold our views as to the pathway to hell, the certainty with which we villainize those who have different views to ourselves. Combined with the abandonment of dialogue, the abandonment of persuasion, the subtle destruction of a wider ‘national’ social trust, will lead to tribalism. The ends must ‘justify the means’ because the alternative is hell.

I think all sides of the political fences can identify with both the perpetrator and the unseen victim in this cartoon because deep down we all want to oppress those who we believe are leading society to hell and we feel it strongly when others try to oppress us.