The Next GFC Already Here?

You are here:
Economics 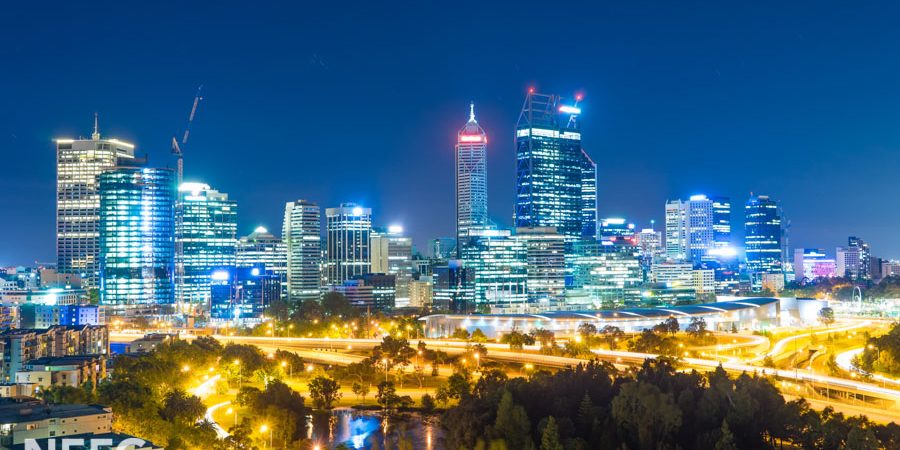 “The only function of economic forecasting is to make astrology look respectable.”
– John Kenneth Galbraith

Abstract: The numbers are astronomical. The worldwide debt is beyond comprehension. The great ‘recovery’ post-2008 never happened. The only thing looking good at the moment is the stock market as company buybacks are at record highs due to low-interest rates and now countries are using the stock market to devalue their currencies. The culprits who sunk the world economy in 2008 are still at large, and the financial reforms needed to ensure that the same problem won’t happen all over again never came. Meanwhile, central banks claim to know what they’re doing as we drift ever more into the dark unknown and unfunded liabilities are moving more and more onto state and national balance sheets.

There are no manuals, theories or mathematical accounting brilliance that can save us from the sheer reality that when the next collapse happens, our governments are all out of ammunition to fight it and the only way forward will be through it. Keynes has failed us and capitalism is possibly more corrupted now than ever before with policies designed to protect the market, freedom, and prosperity being replaced with policies that look egalitarian in appearance but will ultimately feed the mega-corporations that run the world. Venezuela the socialist nation that almost solely depended on oil exports to fund national expenses has already fallen due to falling oil prices, with many other OPEC nations set to follow.

Meanwhile, all this is happening when social and political tensions around the world are at an all-time high.

“another financial crisis not likely in our lifetime”

The world’s economic situation is not in the same shape as pre-2008, in fact, it’s not even slightly close. Since the 2007-08 financial crisis, central banks and governments around the world have been fighting off poor economic performance by any means that they have at their disposal. Typically by printing money into existence through a method called ‘quantitive easing’. The point of this is largely to flood cash-starved markets with much-needed liquidity and thus fight off deflation, with the hope to devalue the currency, increase export competitiveness while creating wealth effect on the population to restore velocity. This combined with maintaining interest rates at next to zero or real interest rates even in the negative has meant that economies across the world have been flooded with cheap cash inflating borrowing to pre GFC levels. While for a long time these methods have been considered the “common weapons” for government economic stimulation from the Keynesian textbook, these tools have now been spent as the government coffers run dry and many of their respective economies have become both simultaneously dependant on cheap cash and other sectors within those same economies have been dangerously inflated by it. The result of this is we’ve had a period where markets have been massively distorted by what is now being appropriately named the “central bank bubble”.

The theory of expansionary monetary policy exists on the notion that the cheap availability of cash will incentivise business and consumer borrowing, so to increase productivity and inflation enabling economies to outgrow the market’s contractionary periods believed to occur roughly every 10 years, a period named the “short-term debt cycle”. This stands in contrast to the government and central bank policies that were held at the time of the Great Depression, where the economic thought of the time was that the drop in consumer demand would ultimately cleanse and correct the market and hence governments throughout much of the depression years had a much more hands-off-approach. The issue, however, is that while cheap cash has been made so readily available, productivity growth across OECD countries hasn’t increased. Instead, the low-interest rates have fuelled stock market booms, corporate stock buybacks, derivative market speculation and housing booms across the world including in Australia, Canada, the UK and the USA as investors have a surplus of available funds and no great places to put it, that is, except for the speculative and volatile cryptocurrency market, all the while asset prices to return are at catastrophically high levels.

An economy addicted to a ready supply of cheap credit would struggle to keep growing. Meanwhile, the government’s options are limited. Cutting interest rates further to spur economic activity would risk worsening the housing bubble and adding to sky-high levels of household debt, already around 130 per cent of nominal GDP and nearly 200 per cent of household disposable income. – Satyajit Das – On the Australian Economy.

More than that, the surplus of cheap credit has lead to wider speculation with consumers and businesses becoming more and more over leveraged. But despite the near zero real interest rates, a larger and larger proportion of the population is starting to struggle with servicing that debt. In Europe, over $1 Trillion dollars is tied up in Non-Performing Loans, restricting the amount of available capital to prime borrowers and placing enormous pressure on European banks with rumours that Deutsche Bank, one of the worlds largest and most influential investment banks, is struggling to stay solvent and two Italian banks this year alone would have collapsed if they weren’t bought out. In Australia, the situation doesn’t seem to be quite as severe but with one major bank reporting that it has over $400 billion dollars in interest-only loans, the situation doesn’t look like it is that much better. However, this doesn’t even begin to scratch the surface on how large the debt burden is on developed nations.

In the United States, the current Federal Government debt is sitting at over $20 Trillion dollars! While this is enough money to stack $1 bills from the earth to the moon… over 5 times… and amounts to roughly $160,000 per taxpayer, this once again isn’t beginning to scratch the surface of just how indebted the United States actually is. The first thing to include in this debt should be the growing State and Local Government Debt, which currently sits around $3 Trillion, of which certain states are already starting to buckle under. On top of this, you then have the personal debt which clocks in at over $12.5 trillion of which the delinquency rates for student loans, credit card repayments and auto loans are climbing to the point that in credit card payments alone, over $1 trillion dollars currently stands as revolving debt an amount that is currently growing at 4.9% per year. While the amount of total consumer debt is now higher than pre-GFC levels, something worth noting is that it was the high levels of bad consumer debt that triggered the GFC in the first place. 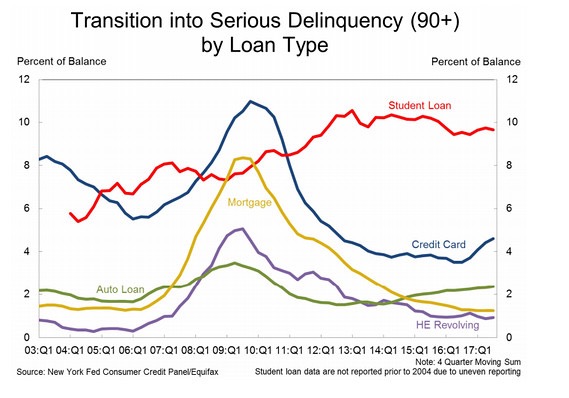 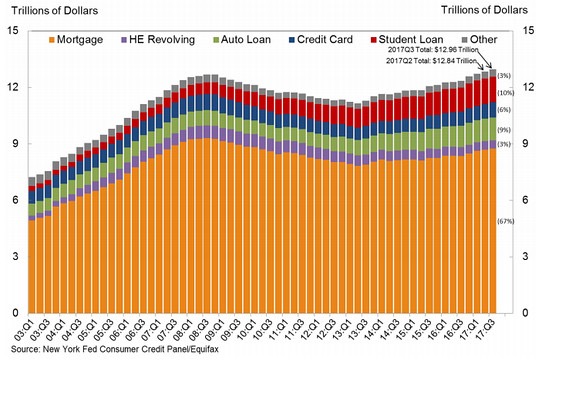 While consumer debt is ballooning both in the EU and the US, we also need to understand the true extent of the American debt bubble, and to do this you need to factor in the amount of money that is on the Government budget that is either unfunded or underfunded. A figure that is projected to sit at roughly $70 Trillion dollars… and that is of course the more conservative estimates, the less conservative estimates that have recently come out of Stanford, project this figure to be closer to $200 trillion.

In many emerging economies, the story, unfortunately, doesn’t seem to be looking much better there either, with the estimated debt now exceeding $23 Trillion, pushed up by India, China and Brazil. The total debt and more importantly bad debt in China is also estimated to be much higher than what officials state with huge sums of money being distributed in their extensive shadow banking sector, an issue that has caused the IMF to downgrade the Chinese government’s credit rating. Not to mention the enormous housing and infrastructure boom that has resulted in entire cities being built and abandoned, resulting in a surplus of over 70 million homes, by comparison, the surplus of houses during the peek of the GFC in the United States was roughly 1 million.

The questions regarding the health outlook for the Chinese economy holds with it a great threat for the future wealth and prosperity of the Australian economy, with the slump in the mining boom already having a profound impact on the Australian Government’s budget due to the loss in mining revenue. While only 1/5th of net mining profits returned to Australian shareholders, the effect of the mining boom on Federal and State Governments budgets tax revenue were profound.

Despite this, good growth for an extended period of time can result in an economic turnaround. The problem here, of course, is that instead of seeing year-on-year job growth and wage growth, across the OECD we’re seeing the opposite. The latest sales data coming out of the UK and Australia, show a decrease in the seasonal consumer spending, which is essential to an already embattled retail sector. In a recent report, some have predicted a closing of up to 25% of retail outlets across the United States, with a record number of retail outlets closing across the states in 2017 alone.

What’s more, all these issues are coming at a time when technology itself is threatening existing jobs at an increasing rate. Automation, artificial intelligence, and even the blockchain threaten jobs that were for a long time considered off limits to machines with the WEF now warning political leaders of the extent of this threat.

With consumers heavily indebted and hence dialing back consumption, combined with a bleak job market, a sliding retail market, a wave of public debt, a flattening yield curve (which is starting to spook investors), increased volatility in the stock market, the question isn’t whether or not we’ll ever “see another crisis in our time” but rather are we in the early stages of it?

What is certain, is that with the weapons that governments use to combat recessions already being spent, the next crisis will be unlike any other financial crisis that the world has ever experienced and with that, the risk of nations and leaders using these extreme circumstances to justify extreme actions is more than plausible. It seems regime change could happen across the planet, attempts will be made to pin the collapse on Trump when the reality is that this next crash will be the combined efforts of a corrupt banking system and a long lasting broken political system with severe regulatory errors made by the Obama, Bush and Clinton governments.

But if all of this is a little too dark for your liking, let us finish this note with the comforting words by GK that put our predictions into perspective.

The human race, to which so many of my readers belong, has been playing at children’s games from the beginning, and will probably do it till the end, which is a nuisance for the few people who grow up. And one of the games to which it is most attached is called “Keep to–morrow dark,” and which is also named (by the rustics in Shropshire, I have no doubt) “Cheat the Prophet.” The players listen very carefully and respectfully to all that the clever men have to say about what is to happen in the next generation. The players then wait until all the clever men are dead, and bury them nicely. They then go and do something else. That is all. For a race of simple tastes, however, it is great fun.

G.K. Chesterton – INTRODUCTORY REMARKS ON THE ART OF PROPHECY